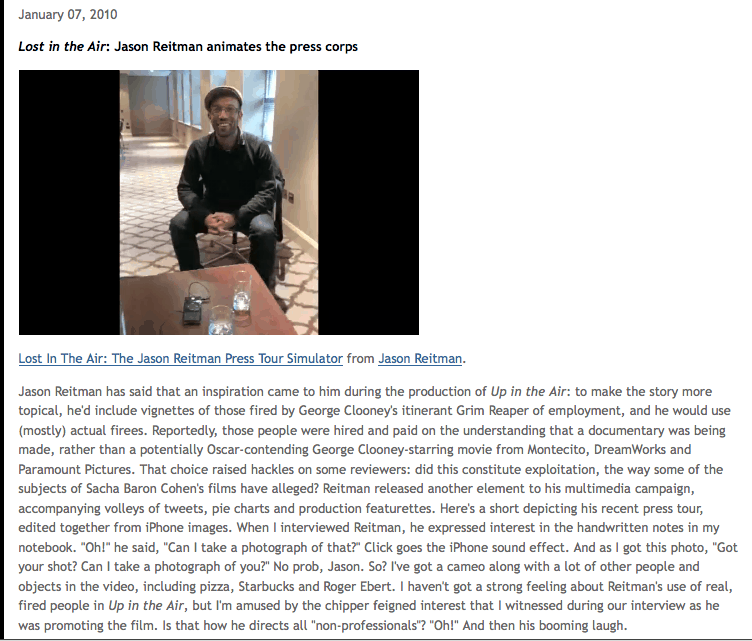 It sounds like a tagline for a very bad rom-com: “3 Months. 3oo Interviews…. A Complete and Utter Blur.” Reitman photographed every single journalist who spoke to him across Europe and North America these past few months and then strung them together. It unspools at quite a clip, so I was quite chuffed to manage to find myself in the mix. Just after The Daily Mail’s Baz Bamigboye. END_OF_DOCUMENT_TOKEN_TO_BE_REPLACED

A good actor offers the director give and take, a variety of options and isn’t just a mannequin to be arranged like a prop.

END_OF_DOCUMENT_TOKEN_TO_BE_REPLACED I’ve just added three reviews of Spanish filmmaker Pedro Almodóvar’s work this decade: Bad Education (2004), Volver (2007) and this year’s Broken Embraces. For me, Almodóvar is one of the very best directors working today and each piece was written for the release of its respective film, a few years apart. END_OF_DOCUMENT_TOKEN_TO_BE_REPLACED

185 features, 133 shorts, over 400 separate screenings, over 500 visiting filmmakers and highest ever audience attendances – the figures for the 51st London Film Festival sound impressive, but we all know statistics can unspool any story. The real question is very simple: was LFF 51 worth watching? END_OF_DOCUMENT_TOKEN_TO_BE_REPLACED