I found a couple of my reviews on the same film, Richard Linklater’s lovely Before Sunset. One is an 80-word capsule, the other a more involved discussion. Interesting to see which one feels more effective five years on.

And for the record, although I never outright say it and contrary to popular opinion, Before Sunrise, its predecessor, is my favourite. Must be a preference for naive youthful optimism over rueful thirty-something experience… 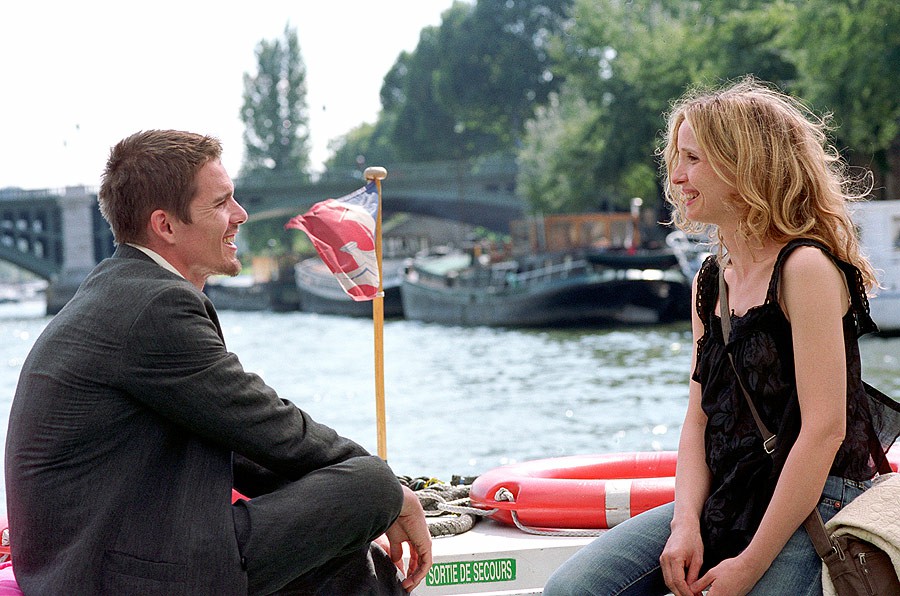 The morning after the night before. 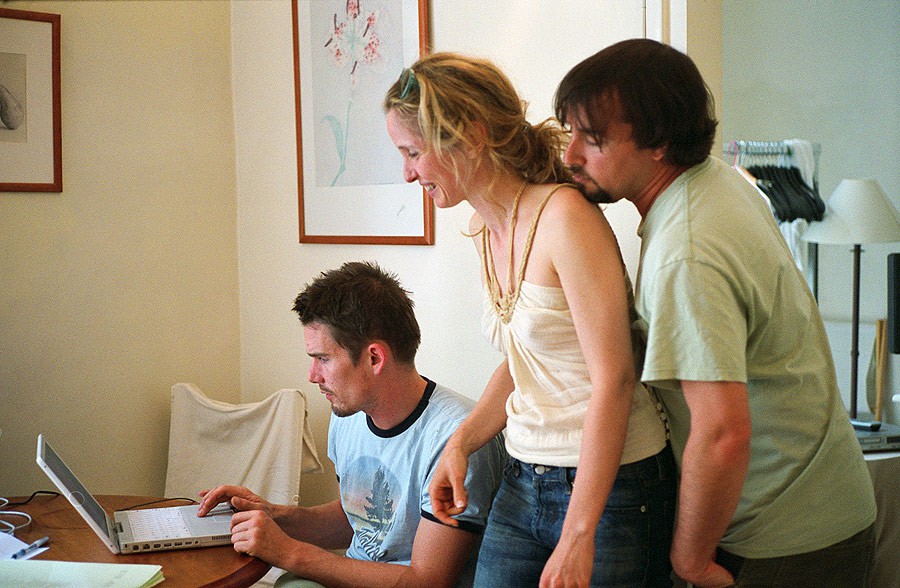 At the end of 1995’s Before Sunrise it wasn’t just the two nominal leads who felt the joy and pain of a fleeting romance. Since its low-key release, Richard Linklater’s twilight love story between an American backpacker and a Parisian traveler over a magical night in Vienna has become a genuine and growing cult item. Its heartfelt look at two young people tentatively feeling – and incessantly talking – their way through the confusions of life and love was worlds away from traditional Hollywood romantic comedies, with their tedious meet-cute, crack-wise and pair-up routine. The sense of something real and unpredictable lingered at the film’s climax, despite Ethan Hawke’s Jesse and Julie Delpy’s Celine promise to reunite six months later (neglecting to swap contact details didn’t exactly fill you with confidence). Nevertheless, and all box-office evidence to the contrary, this was one story where a new chapter was genuinely desired, even if a sequel seemed to go against everything that Before Sunrise stood for.

Yet here we all are. The adroitly titled Before Sunset picks up with Jesse and Celine nine years down the road. Jesse is in Paris to promote a new novel, based on that night in Vienna, when Celine turns up at the bookshop press conference. Reintroductions are a little awkward, conversation a little stilted and defensive, but gradually, as they wander through a Paris mercifully devoid of iconic tourist sights, Jesse and Celine seem to reconnect. We learn about what happened to the planned Viennese reunion and why; what life has held for each of them in the meantime (Jesse is unhappily married with a young son, Celine is an environmental activist drifting in and out of passionate but short-lived relationships); eventually we even light on the burning question – what will happen now they’ve finally found each other again?

Unfolding in real time before Jesse flies back to the US, Linklater’s deceptively simple shooting style focuses attention on Jesse and Celine even more exclusively than in the first film. Interesting too, how Before Sunrise’s luminous optimism – flashbacks cruelly show how Hawke’s boyish, fleshy features have been stretched taut by the passing years – has inevitably shifted into a more shadowy recognition of the darkness on the edge of every relationship, every uncertain choice made.

Written this time by the leads in collaboration with Linklater, the personal investment in character and storyline almost feels like therapy for the Hawke, Delpy and Linklater. Without doubt a degree of autobiography is invited; Hawke is indeed a published author and his well-documented split with Uma Thurman hardly resists reading between the lines that he wrote himself for his character trapped in a loveless marriage. Likewise Delpy has become known in France as a songwriter as much as an actress and her sweet, self-penned ballads bookend the film.

The enchanting thing about these films is that this voyeuristic element, while admittedly part of the appeal, never overwhelms the narrative. It’s the fictional equivalent to those ‘7Up’ documentaries that revisit the same set of people every seven years and you wonder why more filmmakers don’t explore this idea on film. Francois Truffaut and actor Jean-Pierre Leaud’s four ‘Antoine Doinel’ films (plus a short) from The 400 Blows to Love on the Run were a huge success, though Coppola and Pacino almost spoiled their Godfather legacy with a late, substandard third part. The ambiguous conclusion here leaves further adventures for Jesse and Celine very much open.

Is the film preaching to the converted? Although the flashbacks try to give a quick summing up of the story so far, without a doubt this is a film primarily for longtime fans. That’s not to say no one else is invited but it’s strange to think newcomers will enjoy the same sense of resonance and poignancy as those who’ve been dreaming about Vienna for nearly a decade.

‘What if you had a second chance with the one that got away?’ asks the tagline. Those not already smitten may be bemused by Linklater, Hawke and Delpy’s defiantly unconventional ongoing romance; but anyone who fell for them the first time will find Before Sunset impossible to resist.